skip to main | skip to sidebar

If Hugh Hefner’s girlie magazine for men came to India, as is feared, who would be the ‘most wanted’ Indian subjects for a cover? indiatimes.com ran an online poll that revealed Mallika Sherawat, Katrina Kaif and Sherlyn Chopra would be the top three. Read why these girls were chosen over the rest of Bollywood’s hotties to be, well, desi bunnies....

Mallika Sherawat (1st place)
Mallika has moved her base to LA and guess it’s helping as the actress’ popularity on the basis of her sex appeal is at its peak. The actress who isn’t seen in Bollywood these days topped the poll with 20 per cent surfers voting she had the greatest potential to pose for the cover. Mallika’s curvaceous body would look great on the cover was the reason behind her votes.

Katrina Kaif (2nd place)
The gorgeous Katrina followed Mallika closely with 14 per cent votes. Katrina comes across as a demure beauty; to see her going bold would be interesting was the opinion of her voters. The actress’ popularity in Hindi films also contributed to her second position.

Sherlyn Chopra (3rd place)
Sherlyn, who will be seen in Aditya Chopra’s forthcoming film Dil Bole Hadippa, secured her place in the top three as she won 12 per cent votes in the poll. Sherlyn was voted for her perfect body and confidence. Surfers even labelled Sherlyn as the ‘Carmen Electra’ of Bollywood.

Bipasha Basu (4th place)
Bipasha came in fourth in the poll by winning 9 per cent votes. Bipasha Basu’s raw sensuality would make for the perfect cover was the common opinion.

Aishwarya Rai Bachchan
(5th place)
Ash managed to get herself in the fifth position as 8 per cent fans voted for the former Miss World as a potential playmate. The actress representing India abroad and her being the perfect Indian beauty worked in her favour.

Priyanka & Celina (6th place)
Priyanka Chopra and Celina Jaitly shared the sixth place in the poll as both got 5 per cent votes each. Priyanka is a bit too skinny, while Celina is not much in the news and thus not hot enough, was the complaint and the reason for their sixth place standing in the poll.

Deepika, Kareena, Shilpa, Sushmita, Lara, Minissha, Kangna (7th place)
All the above actresses got 3 per cent votes each and thus ranked seventh. They won’t make for a great cover was the common opinion.

Shriya, Sonam, Neha (8th place)
Sonam Kapoor, Neha Dhupia and Shriya Saran came in the 8th place as they garnered 2 per cent votes each. Most of their admirers believed they looked better in Indian clothes so it would be difficult to visualise them as sexy covergirls.
Posted by Damilola Adejonwo at 3:05 PM 1 comment:

Get Sherlyn for $25 Dollars

The hot, item gal Sherlyn Chopra, has come up with an interesting plan to lure her fans. You just have to buy a platinum membership on her website for a mere $25 and the femme fatale will make you feel more desired.

We kid you not, that’s the unbelievable offer available on her official site, where you will get the chance to view her uncensored videos along with many other exclusive privileges.

The members are not only fortunate enough to see her videos; they can spend a day (not night!) with her at a photo shoot or can be there on the sets of her forthcoming movies. They can also chat with her twice a month and can even download her official Bikini 2009 Calendar Wallpapers. Apart from these perks, Platinum Club members can also enjoy various other tempting offers that are available on the site.

According to Sherlyn, the reason behind this unique fan club came as a response to her fans asking for a chance to spend some time with her. The Club is already boasting around 150 members and with membership limited to 1000 members, any interested men better act fast.

Sherlyn’s next outing will be in Yashraj Film’s Dil Bole Hadippa where she will be sharing screen space with biggies like Rani Mukherjee and Shahid Kapur.

We must say she is not only sexy but smart too, all for fans or all for business, girl?
Posted by Damilola Adejonwo at 3:02 PM No comments: 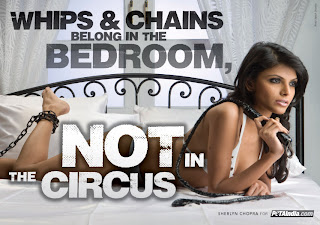 People for the Ethical Treatment of Animals (PETA) has roped in actor and model , Sherlyn Chopra for its latest Anti-Circus Ad . The "outrageous" babe Sherlyn Chopra according to PETA , agreed to bare the truth to all by posing in a white bikini with whips and chains next to the tagline "Whips and Chains Belong in the Bedroom, Not in the Circus". This sensuous ad was shot by top photographer Rakesh Shrestha. Chopra was moved to tears when she heard about animals who "entertain" people in circuses.

Why is the sexy actor making noise about the circus? Four years ago, 21 animals – including four sea lions, 10 dogs and seven cats – were burned to death in Mumbai. The animals had been abandoned on a field by the event management company that had brought them to India from Russia. A fire whipped through the tent where the animals were imprisoned and killed 21 of the 24 animals.

Animals in circuses lead lives of chronic confinement, constant physical abuse and psychological torment. They are trained under the threat of beatings and whippings and are compelled to perform under duress and the fear of what will happen if they resist. Circuses give audiences a distorted view of animals. Animals do not naturally ride bicycles, stand on their heads or jump through rings of fire. In contrast to the glitter associated with circuses, performing animals' lives are miserable. Whips, ankuses and other tools are often used to inflict pain on animals and to force them to perform. Even the animals' access to water, food and veterinary care can be severely limited.

The conditions in which animals in circuses are kept are pathetic. Dogs are crammed into dirty cages and are hardly ever let out of them. Many birds have their wings clipped and are kept in cages so small that there is no room for them to fly. Horses are kept tethered on small ropes. Elephants are always tied by three legs, and trainers regularly beat them to keep them docile.

"Physical punishment has always been the standard training method for animals in circuses", says PETA India's Sachin Bangera. "Animals are beaten and whipped to make them perform – over and over again – tricks that make no sense to them."

"When I pose in chains, it's news", states Chopra. "When circus animals live their lives in chains, it's business as usual. Only a sadist could desire pleasure by watching an animal being forced to engage in an unnatural act all in the name of 'entertainment'."
Posted by Damilola Adejonwo at 2:57 PM No comments:

Sherlyn will tell the truth

Sherlyn writes about the importance of speaking the truth and facing the heat that follows in her latest blog. Here’s what she has to say:
Sach ka Saamna is not just a great concept for reality TV but also a great motto to follow in reality. Truth hurts. And truth also sets one free from the bondage of guilt, shame and reproach. I find truth very fascinating and intriguing. I love the idea of embracing truth not just occasionally but on a regular basis. It helps me avoid unnecessary entanglements and gives me a clearer perspective of life ahead. Also, I truly believe that the best way to deal with the skeletons in our closets is to bring them out into the open (need not necessarily mean national television). When they are brought into the light, the adverse effects on us begin to nullify. That is the beauty of unveiling pent up emotions and reaching out to one’s inner most core. The pseudo intellectuals of our society strongly believe that a reality show like this is not meant for Indian society which is perceived to have conventional beliefs.
I give double thumbs up to the production team for bringing this ‘out of the box’ concept to India. After the first show, there were multiple reactions from various individuals from different walks of life. Some criticized the idea of speaking the truth on national television, as they feared the truth might jeopardize human relationships and disturb the peace and harmony within society. Some raised questions on the authenticity of the polygraph tests. Some said it was just another attempt to raise TRP ratings. Nothing more. I truly applaud the concept of the show. It is more entertaining than other reality shows where individuals are required to perform tasks. And when they fail to sustain the viewers’ interests, they resort to catfights and mediocre attempts of titillation. Wherever truth goes, controversy follows. I understand the repercussions of speaking the truth on national television. The consequences might be totally devastating. Nevertheless, I prefer speaking the truth and facing the heat that follows to living in a web of lies. I’m not suggesting we speak the truth at all times and with everyone. Life would then become humorless and quite complicated. We as adults should have the discernment to distinguish between and conviction and condemnation.
Truth that helps a person acknowledge his faults, weaknesses, shortcomings, character flaws is conviction. Truth that makes a person feels worthless causing deep shame, thereby leading to a very poor self-image is condemnation. I strongly believe we all need to be convicted on a day to day basis so that we become better and more loving human beings. At the same time, one must avoid condemnation in every possible way as it spreads negativity. The bottom line is that I can choose to be truthful to my inner self or choose to lead a delusional life where there is deceit, lies, fabrication and eternal misery.
Posted by Damilola Adejonwo at 2:53 PM No comments:

Bollywood films are increasingly finding a permanent place in the Toronto International Film Festival (TIFF). If last year, Vipul Shah’s Singh Is Kinng and Nandita Das’s Firaaq had their world premiere at the fest, this year, the Yashraj Films presentation Dil Bole Hadippa and director Ashutosh Gowarikar’s What's Your Raashee? is headed to the festival.

Starring Shahid Kapur and Rani Mukherjee in leading roles, ‘Dil Bole Hadippa’ tells the story of a city-bred guy who goes to a Punjab village to start a cricket team. Rani plays the village belle who loves to play cricket, but can’t because the game is forbidden to girls in her village. So she dons the guise of a guy and becomes Veer Pratap Singh from Veera.

Also starring Anupam Kher, Dalip Tahil, Rakhi Sawant and Sherlyn Chopra, the movie is a romantic comedy with doses of drama and music. It is set for release on September 18 in India.
Posted by Damilola Adejonwo at 2:44 PM 1 comment:

Damilola Adejonwo
My name is Damilola Adejonwo, I am 19 years old studying journalism with the dreams of becoming a fashion journalist and professional makeup artist. Fluent in English & Spanish. XO